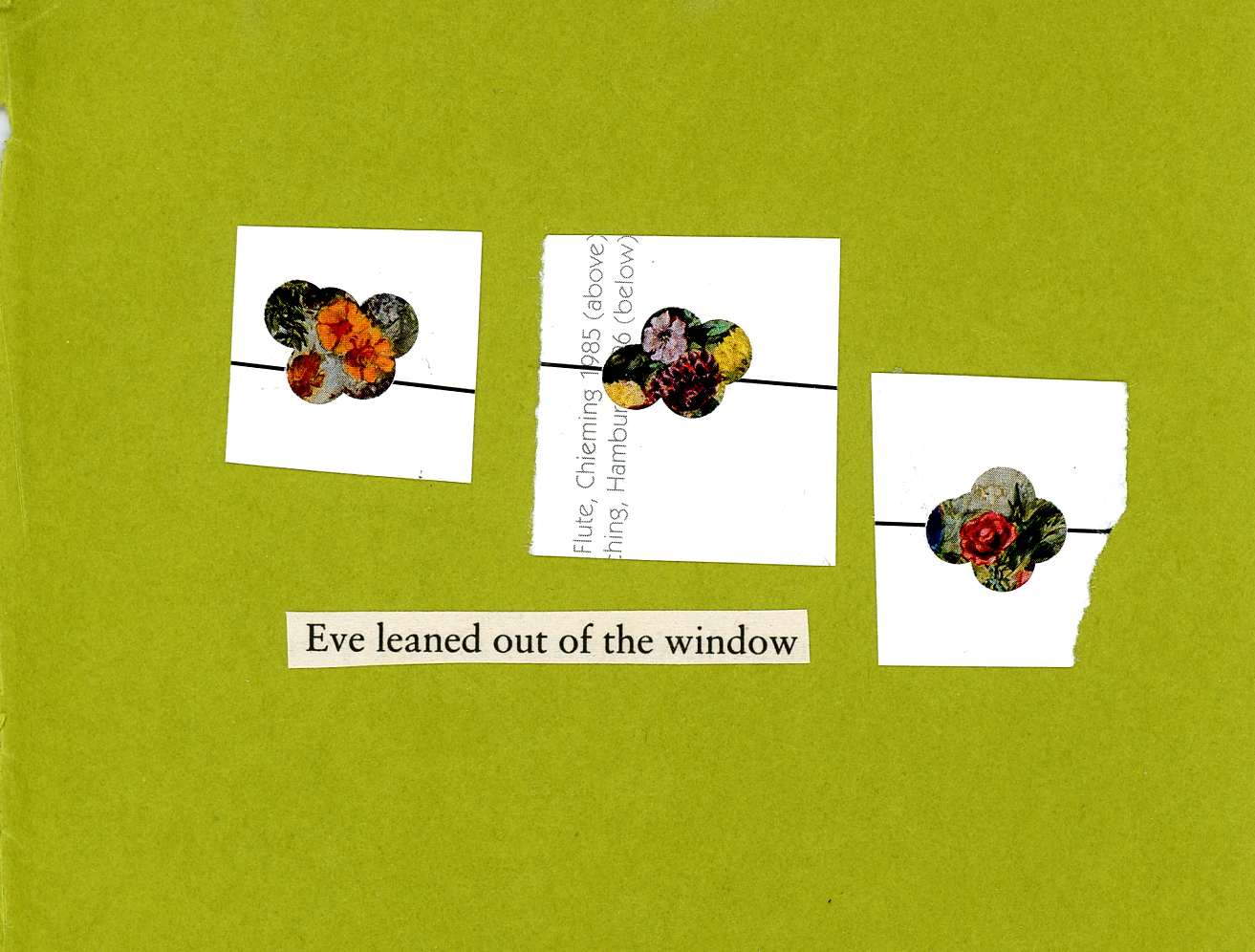 Genevieve Betts  A QUESTION OF WHOLENESS

Lisa Carl  THE SCIENCE OF SLEEP

Hannah Mahoney  ARE YOU READY? and THE WORLD IS SPINNING

Mark Young  from THE POUND CENTOS

THE SCIENCE OF SLEEP

Those blue lights keep us
from getting enough—
a modern bedtime ritual,
the backlit screen.

We climb to the mountain edge, where
tourists flock after dark to see blue
flames from the combustion of gases.

We undergo a startling
metamorphosis. We become
almost paralyzed. We approach
the frontiers of death.

Our team flies to an Inuit village–dilapidated buildings,
empty fuel drums–a desolate landscape, the bear lying
on the ground like an abandoned rug, nearly lifeless.

Life on a spinning planet,
with its endless wheel
of day and night, aims
to sync us with the sun

In West Papua, catchers bring butterflies for inspection.
They come from all directions, sometimes in the morning,
sometimes from darkness, dark, ghostly shapes in the air.

One’s nightly spindles
curate memories throughout
the looping voyage of the night,
of harrowing missions.

We traverse the roadless landscape, trek up valleys
where villagers tend apricots at the foot of glaciers,
barely aware of the bloodshed in the distant capital.

Love letters, a CD player, tequila, a Bible containing
tickets to a soccer match in Bolivia, a dozen kangaroos
and wallabies, foraging for seaweed in the waves.

In the untamed jungle
of the mind, our savage
instincts arise.

A Maasai girl bounces on the carcass of a female
elephant, poisoned for raiding grain stores.

Sex drive, elation, love:
the playtime of the brain.
Why do we stay awake?

Method: My rules are that I can use any words or parts of words so long as they appear in the same order as in the source, and that the found poem should not tell the same story as the source.

Ama Bolton, former member of The Liverpool School of Language, Music, Dream and Pun, runs a monthly open-mic and has performed at festivals in England. Her poems have appeared in magazines and anthologies and online.

THE WORLD IS SPINNING

It all ends
Not quite what you hoped for?

Method: Each line or sentence, including the titles, has been lifted verbatim from the 2019 IKEA catalog.

Hannah Mahoney is a coauthor of Dream Language: For Three Voices (Yet to Be Named Free Press). Her work has appeared in a variety of journals, including at the Mann Library Daily Haiku website.

What now Elon?
Where is your soul, black man?

A disturbing photo and a leaky can of pepper spray
ruined this flight to Hawaii.

The most stirring moments from the Memorial service.
Prince Harry sings!

Lustful dolphin causes swimming ban.
Meet the man she fell in love with.

Slow down and live long with this ancient practice.
9 hotels to sleep in before you die!

See thousands of fish fall from the sky!
We’re going to build a lunar colony out of moon dust…

Method: All this text was found on September 1, 2018 on the home page of the CNN website. No clicking was involved.

Rick Lupert is a Los Angeles based poet and author of 23 collections of poetry, most recently Beautiful Mistakes (Rothco Press), and is founder of PoetrySuperHighway.com.

from THE POUND CENTOS

The hooves, moving in
heavy air, clink & slick
on the cobbles. Palace in

smoky light. Hard night, &
parting at morning. Not a ray,
not a slivver, not a spare disc

of sunlight. Thin husks I had
known as men, weaving an
endless sentence, propped

between chairs & table. &
then went down to the
ship, mad for a little slave

Cast on a natal paper, set with
an exegesis, told, our pact
stands firm, from half-dark

to half-dark. Goat bells tinkled
all night. Beaten from flesh
into light, dark shoulders have

stirred the lightning. The air
was full of women, flitting
& fading at will. Honey at the

start & then acorns, passion
to breed a form of things, of
men, in shimmer of rain-blur.

Been to hell in a boat yet? The
words woven in wind-wrack.

He took it up to Manhattan, to
the big company, & they said:
“The answer to that is they’re

solid bone. You can amputate
from just above the medulla.”
He never could get it to work.

The slick guy, decked all in green,
with sleeves of yellow silk &
holding his golden wand, looked

out of the window. He knew me
& spoke first. “They came & cut
holes in rock for sacrifice, heap-

ing the pyre with goods. Sparse
chimneys smoke in the cross light.”

Source & Method: All four poems are shaped from phrases & sentences taken from Ezra Pound’s Cantos. The first couple I did fell out as 14-liners, so I have kept that form throughout.

A QUESTION OF WHOLENESS

Paths forked off and forked off
some more. I followed the monk
through a maze of cloisters.
We came to a quiet place, a grave.
The milky turquoise vow of silence
hung white in the twilight.
I passed through a great doorway
and stood in a network of tunnels.
The music of dulcimers lit the path.
Holy Mountain, I feel like I’ve
climbed out of a dark box and into quasars.
There are so many
cities in every single city sometimes
language can’t even read
the music of meaning, the me
that lives in me. I’m this person,
I’m that person, I’m that person too—
tiny life-form of star compost
full of the sun and the moon.

Source & Method:  Lines taken from David Mitchell’s novel Ghostwritten. After my book of poems came out in 2015, I was looking for a new way to write, a new language. While reading novels, I began underlining lines that stood out to me, usually due to their standout language or strange wording. I decided to use these lines to generate centos and found pleasure in puzzling them together to form poems. I was surprised to discover that although I was speaking through the words of others, it was my voice rising to the surface of each poem.

Genevieve Betts is the author of the poetry collection An Unwalled City (Prolific Press, 2015). Her work has appeared in The Tishman Review, New Mexico Review, Hotel Amerika, The Literary Review, and in other journals and anthologies. She teaches creative writing for Arcadia University’s low-residency MFA program and lives in Santa Fe.

Jane Attanucci’s poems have appeared in The Aurorean, Bird’s Thumb, Off the Coast, The Pittsburgh Poetry Review, Right Hand Pointing and Third Wednesday among others. Her chapbook, First Mud, was released by Finishing Line Press (2015). She lives in Cambridge, Massachusetts. 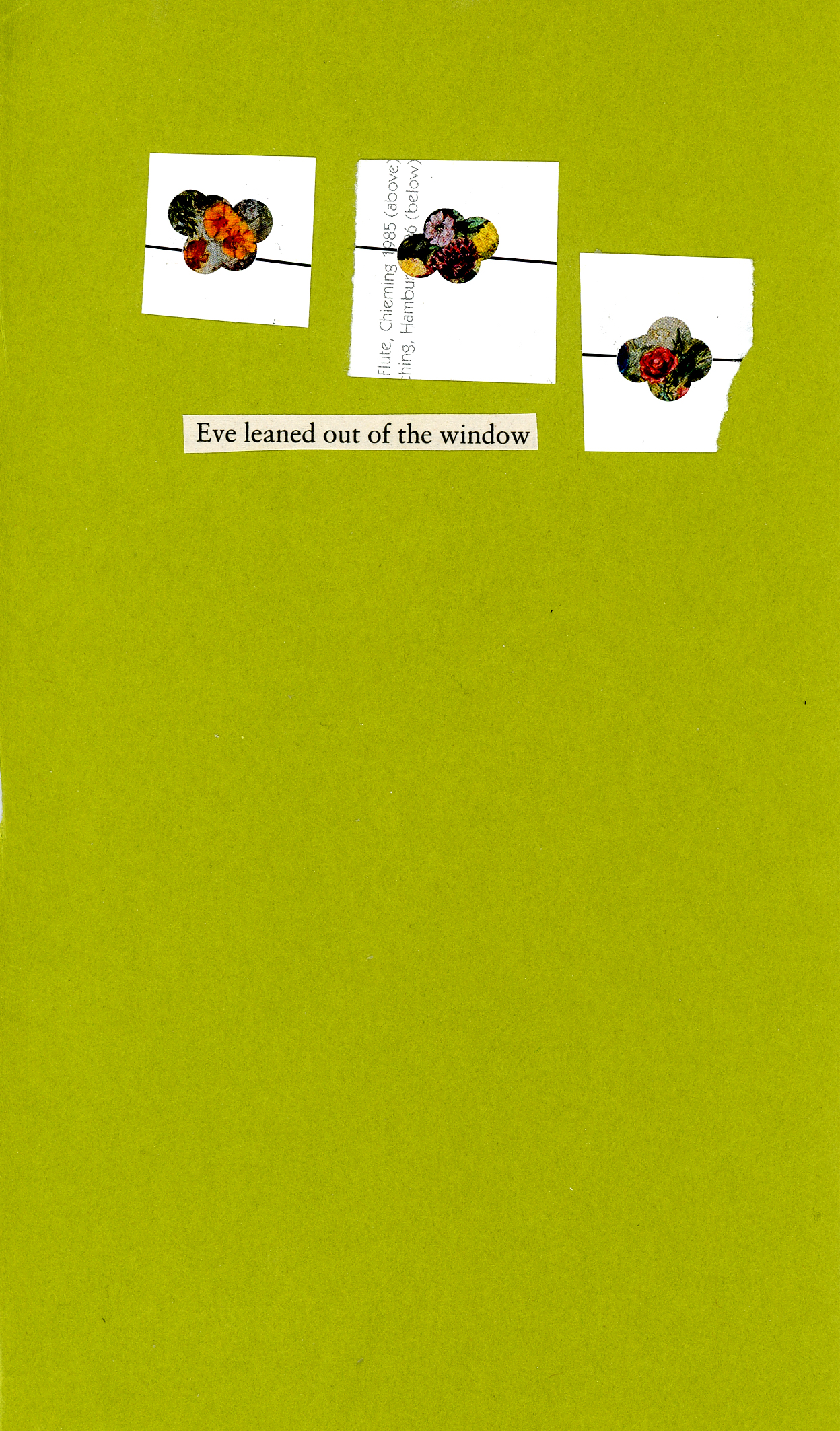 Text from “The Accidental” by Ali Smith.

Sarah J. Sloat splits her time between Frankfurt and Barcelona, where she works in news. Her poems and prose have appeared in The Offing, Hayden’s Ferry Review and Sixth Finch, among other journals.  Follow her on Instagram at @sjane30.

Method:  This came out of a weeklong National Endowment for the Humanities seminar I participated in 2 summers ago about the Shakers here in east-central New York and western Massachusetts. It came directly from material I saw handwritten in Hancock Shaker Village in Massachusetts.  I haven’t changed it a bit. 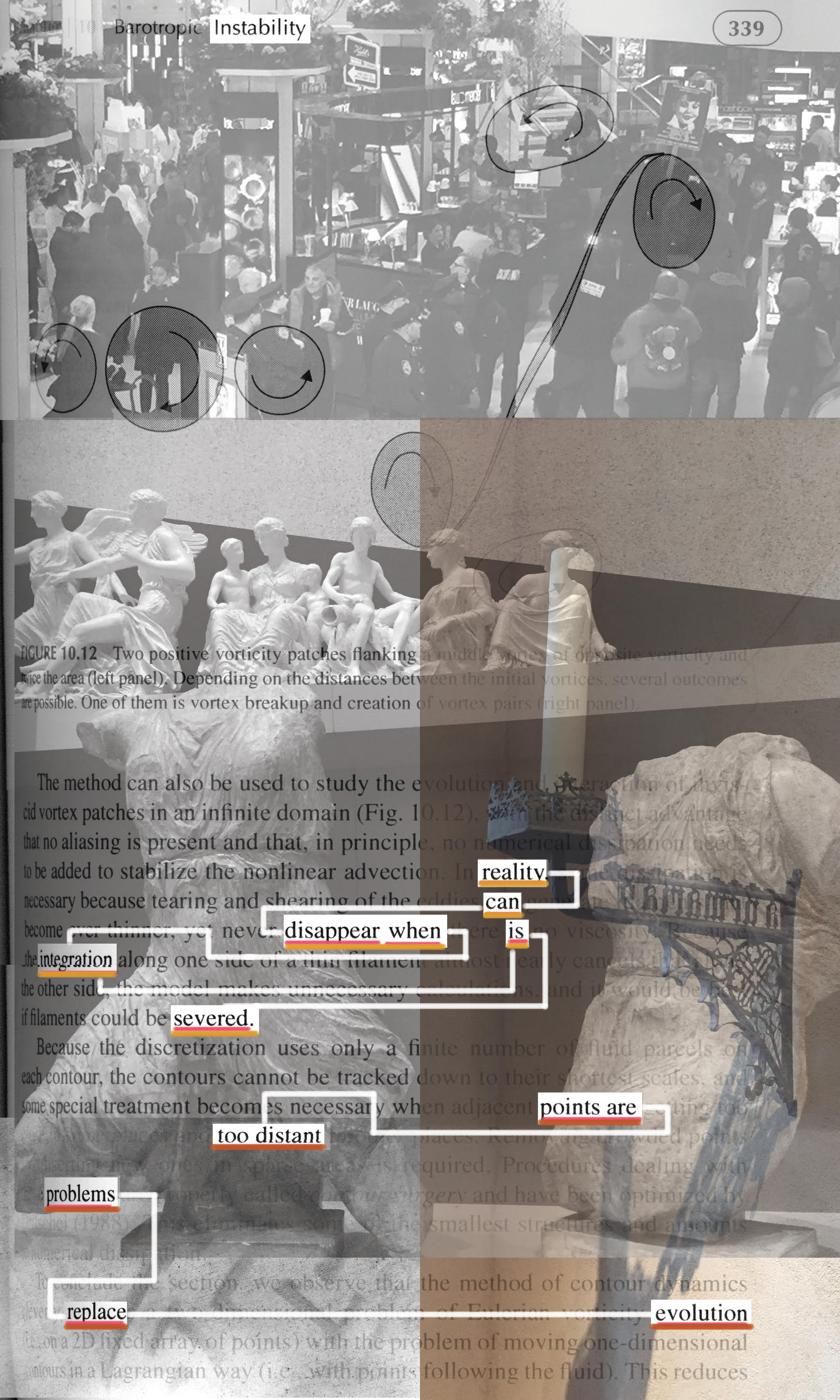 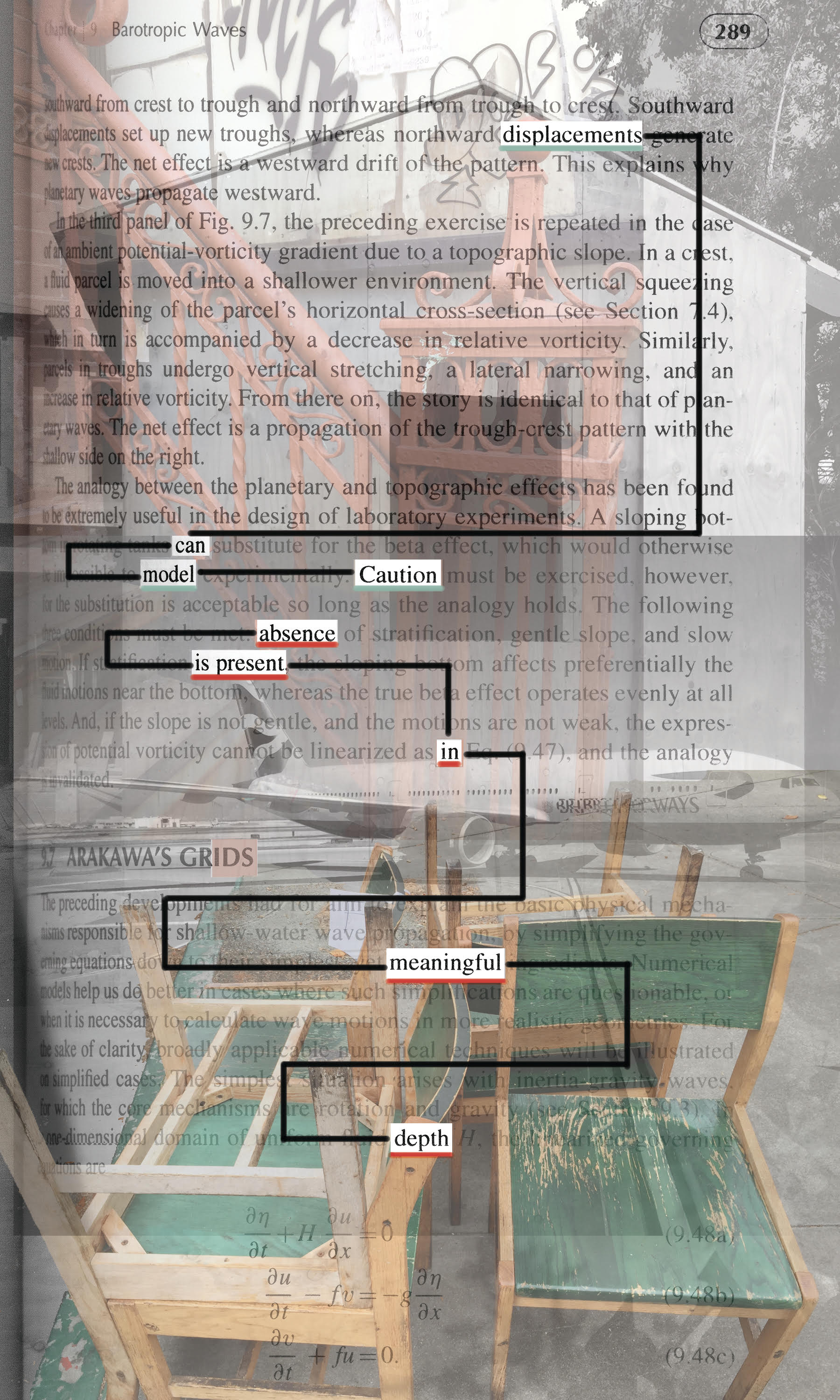 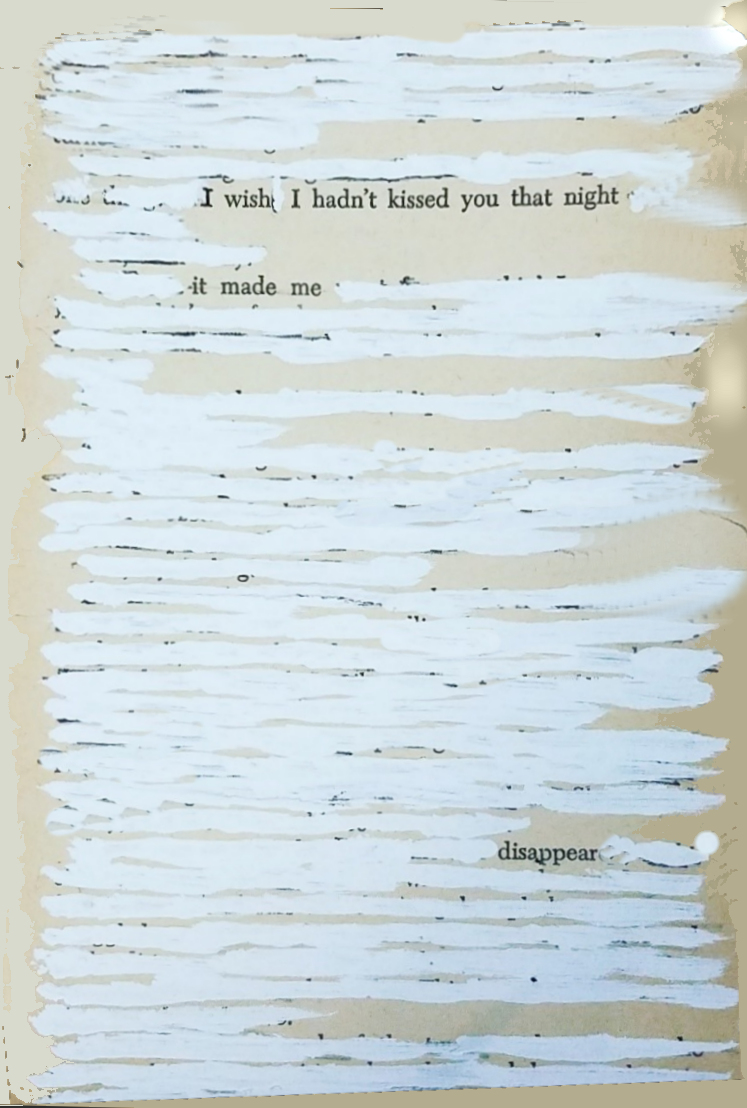 Source:  Look Away, Look Away by Leslie Turner Whit

Method: As a librarian, I often come across books that are crumbling or falling apart. I go into a lot of poems with a subject or theme in mind, but sometimes I just scan words until a phrase or word pops out at me.

Brandy Smith was born and raised in Virginia where she currently works as a librarian. Writing has always been a passion and you can often find her thinking about superheroes.

Sarah tried pills for her pain.
She tried stretching. She
tried yoga. She tried opiates.
She tried forgetting about it.

Pain patches and acupuncture.
Injections and prescriptions.
Opiates and physical therapy.
Heat and compresses. She
tried ignoring it again.

Sarah couldn’t sit. She
couldn’t stand up straight.
She couldn’t lie down
on her back. She was weak.
She had lost muscle tone. She
fainted on the subway. Sarah knew
she was falling apart.

One summer day, Sarah
doesn’t remember exactly when,
she fell. After surgery that September
pain seized hold of her again.
The surgeon said nothing more
could be done, leaving Sarah
to keep searching for other pain
management options.

Method: As someone who lives with chronic pain, I was struck by how accurately this article portrayed the frustration of the cyclical efforts of finding some succor. It’s a relentless battle of seeking, hoping and discarding treatments/tools/therapies. I took primarily the first lines of the article to depict this almost ritualistic struggle of a chronic pain patient.

Monica Shah was born in London and grew up in various small towns in the UK, Africa, India and America. Her writing often explores identity, relationships, and culture. Her poetry has appeared in literary magazines including Chaya, Three Drops from a Cauldron, Edison Literary Review, and in the anthology Bolo Bolo!

A foggy translucence covers the world.
From fog to snow to frost to the crystals growing outward on threads of light,
the transcripts of fog
spill over my faint lines and anyone could cross me out,
like scrimshaw on the jawbones of whales.

Don’t listen to the chorus of fog, its unbearable
cumuli (their bulky white counter-
shadow on shadow. The cats, as usual
looking for somewhere to dissipate,
learn new songs of despair and delight,
green songs they could not unlearn
in which perspective invents itself
not; like fog no one can keep from disappearing.

METHOD: Each line of each cento comes from a different poem, as listed above after each cento, line by line. These are poems I’ve particularly been impressed by over the years, and I just mixed and matched lines to make the centos.

Jessica Goodfellow’s books are Whiteout, Mendeleev’s Mandala, and The Insomniac’s Weather Report. She was a writer-in-residence at Denali National Park and Preserve. Her work has appeared in Threepenny Review, Beloit Poetry Journal, The Awl, The Southern Review, Motionpoems, and Best New Poets, and is forthcoming in Best American Poetry 2018. 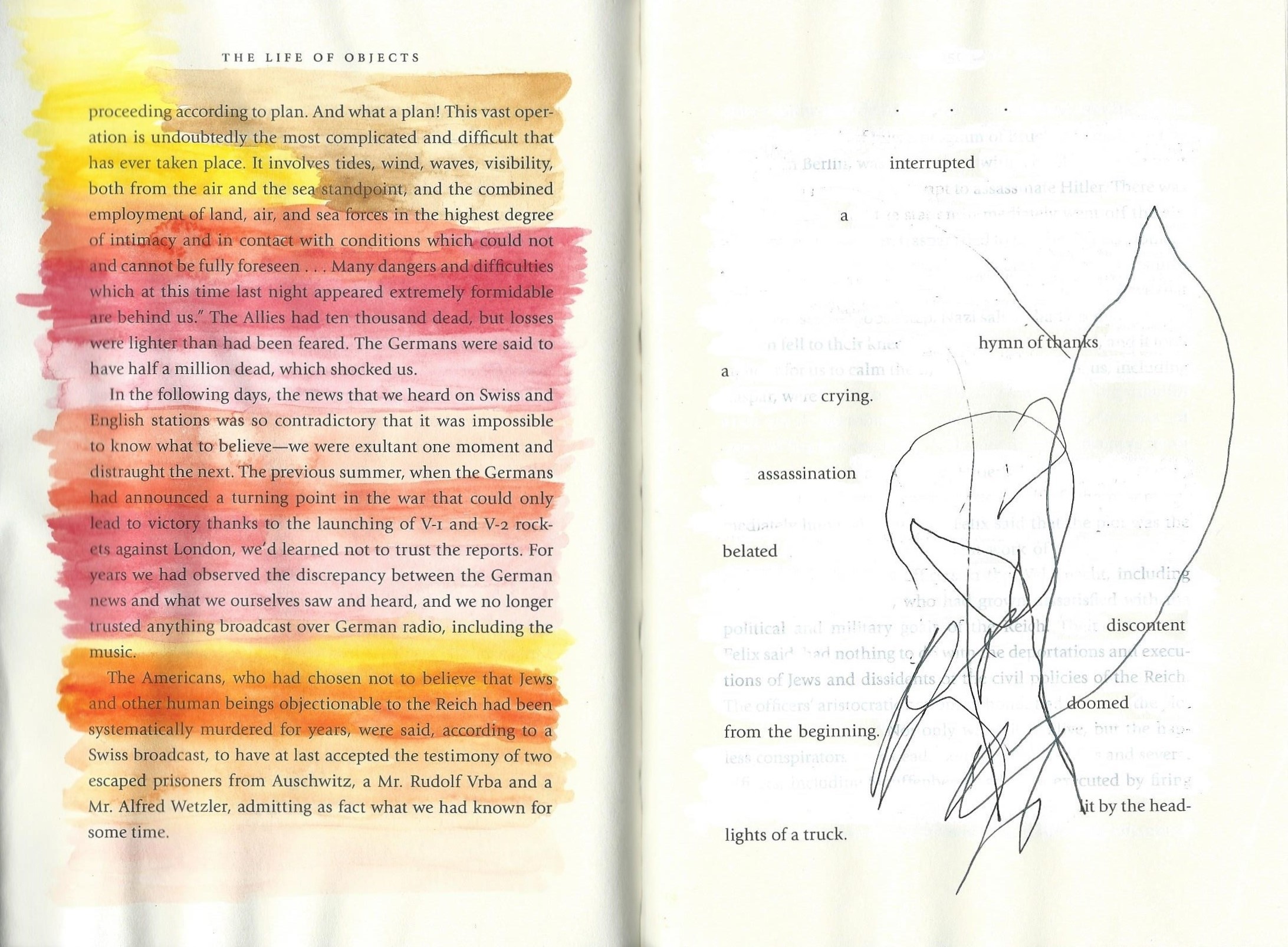 Method: Source: Susanna Moore’s “The Life of Objects.” I had completed “Interrupted” and left it out to dry when my four-year-old scribbled on the page. Here is the ultimate work of motherhood and Dadaist art; chance, absurdity and interruption.

Natalie D-Napoleon is a writer, educator and singer-songwriter from Fremantle, Australia who now lives in California. IShe has  an MA in Writing and currently works as a Coordinator at a Writing Center. Her  work has appeared in Entropy, StylusLit, Poetry WTF?!, and The Found Poetry Review.