I’m on fire and
with your pale lips you’re talking of soft alley sex,
the rattle your knuckles make, of bones breaking.
You’re watching it transpire
but with all your talking
the sound is consumed like a fever.
What’s driving you tonight?
It’s not just kiddie play.
As the greatest people are,
I’m on fire.

You lay still, are open.
I could transpire
While you’re watching on.
Is dark fire what’s driving you?
To taste the fire is to taste
the commotion of your sex.
You transpire like sex, don’t you?

A day on they’re dying but
What’s forever to them?
We’re the ones sex has consumed.
I just know it feels the greatest.
Oh, your head: it’s on fire.

Laying where the greatest sex is,
we’re consumed, dying.
It is hot.

Ross McCleary is from Edinburgh. He was born 9 months after Jorge Luis Borges died. He has a novella being published in July through Maudlin House.

Encounter of a cliff’s edge,
Losing the Sun to the evening sky,
Sinking into the sea stars,
My back against the wall
Worn like delicate wounds,
Eyes look toward heaven’s luminous moon.
The inner curtain torn,
Bodily glow discolored
Bubbling regret,
While tasting the bitter froth
That slept in winter’s jaw,
With worn feet I crept across
a vassal land of frost.
Handicapped by pointed fingers
Painting glimpses of an outer world
Stuck inside my inner world.

Matthew J. Lawler is a Chicago native raised on the City’s North Side(Irving Park neighborhood) He now resides in Skokie IL. His work is published in Visual Verse and forthcoming in the People’s Tribune and Caravel Literary Arts Journal. He has been writing poetry since his teenage years. His poetic themes are usually urban in nature and rich in narrative quality. Find him at facebook.com/matthewjlawlerpoet

What’s new in this edition?

I will accept all the packages except that one.

Why am I communicating?  Do you have length specifications?

You may encounter tricky situations.  (see the end of this chart.)  If you aren’t sure of the standard forms, Strip away.  Strip away.

The comma was invented.  While we were eating a rattlesnake approached our campsite.  There is no danger of misreading.

Even when she enters the hospital on the brink of death, the anorexic will refuse help from anyone.

You may have to puzzle it out.  The raw coffee is surprisingly fruitlike and fresh.  Conclusion: Together farmers and consumers hold the future.

One student invented a calendar.  Revise your initial assumptions. Once you have an aerial view of the topic, do nutritional food labels inform consumers or confuse them?  What causes depression?

Appropriate.  Mixed constructions.   You may find this section helpful if you speak a language other than English.  Dreaming in Cuban.  The ambassador hired her for the European tour.  Gianna is not  a member of the club.  Inna should not have gone dancing last night.

Understand what plagiarism is

Tara Roeder‘s work has appeared or is forthcoming in about two dozen venues including The Bombay Gin, The Journal of Compressed Creative Arts, and E-Ratio.  Her chapbook, (all the things you’re not), is available from dancing girl press.  She received her Ph.D. from the CUNY Graduate Center, and is currently an Associate Professor of Writing Studies in New York City. 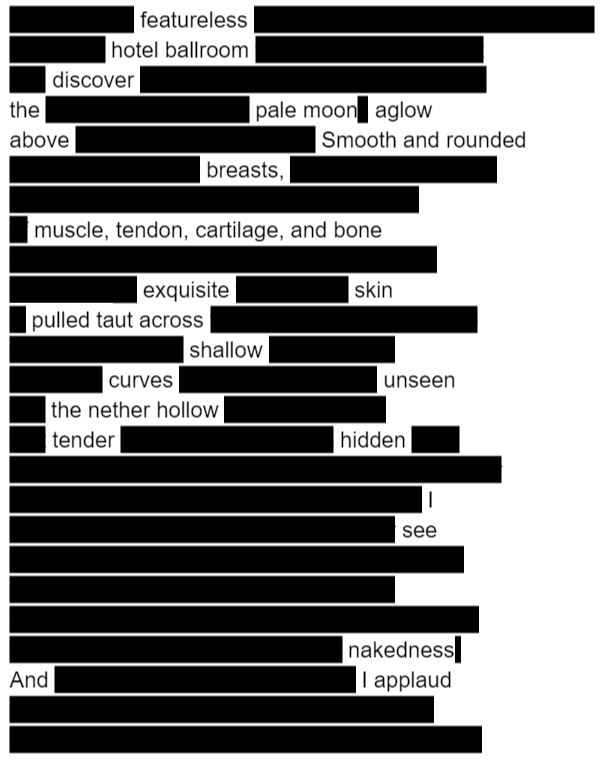 Ella Ann Weaver is a queer non-binary femme living in the deep South. She is a Creative Writing major and the Non-Fiction editor for Crab Fat Magazine. She is also the proud parent to two fur-children. She is a recovering Christian and passionate about LGBTQ rights.

In his Introduction of
“Dreams – a Way
to Listen to God,”
Morton Kelsey writes,
“The purpose of this book is
to show
Accurately and simply
How the ordinary person
Can begin to understand
The incredibly varied
And fascinating shows
That take place within our psyche
Each night.”

Collections of collages
Cross my picture screen
Whenever I go to sleep.

Kelsey says that God’s the speaker
In this production of our dreams.
But then again perhaps
It’s only as it seems.

It seems that someone
Found all my photo books
Then slipped the slides through the solution
And hung them up on hooks.

So in the dark room of my brain
I do a paste-up job.
I make a darn good artist!
Or is it really God?

Cherise Wyneken is a freelance writer of poetry, prose, and children’s stories which have been published in various publications, reviews, anthologies, two collections of poetry, two poetry chapbooks, and an audio-cassette. Her poem, Borne Again was nominated for the 2012 Poetry Pushcart prize.

He was
feeling insulted (by a peer)

He was
feeling unfairly criticized (by a professional critic)

He was
feeling diminished (by commenters)

He was
feeling (merely) exposed

He had
a recurring sense that if

He had
allowed her to speak

He would
have been (destroyed) forever.

PJ Wren is scientist and writer from Kensington, Maryland. Her work has appeared in The Lake, Apocrypha and Abstractions, and elsewhere.

There are two works of Aristotle
in which dreams are mentioned.

Ergo, the ancients had the same
idea concerning a dependence

of the dream-content on life[1].

Everyone who occupies himself
with dreams will recognize, as a
very common phenomenon, the fact
that a dream will provide
profound insight.

The phallus manifests
in both a dream state
and in reality.

Eliot Gilbert has been published or is forthcoming in The Puritan, Calliope, Eunoia Review, The Woven Tale Press, as well as several other places. In addition to this, Eliot serves as associate editor at Existere literary journal and poetry instructor at the town of Newmarket.

Hospital receptionist Joy Scott on the plan:
“Now for healthy, tasty turkey­overs,
computers are wave of the future. But do we
all need them buddies?”

Margaret Thatcher and
Brian Mulroney share more
than a high regard for each other!
They also enjoy catering to people who
play with computers as a pastime.

Right, is president splash down? He
lands in Lake Ontario, just offshore
the falls of Niagara.

Sleep­in of 150 Yorkville hippies
in front of City Hall began last
night as boys and girls settled down
with armouries.

Woodstock: a woman sobs in anguish.

On Canada, attack and counterattack
featured the confrontation between federal
and provincial leaders at the constitutional.

Deep in the heart of
one four nuclear reactors
at Pickering power station,
technicians prepare tubes
that will burning of the
Rossin House.

Milton, if ye break faith we shall not sleep.

Good weather for flying awaits these

Canadian armed forces jets at Trenton
air base, which were to take part in the
Bird’s­ eye view of Victoria, British Columbia.

Sunnyside. A sailor gets a resounding victory kiss.

Alan Harnum is a software developer and former librarian in Toronto, Canada with an interest in how computers help, alter and impair the creation of art. Much of his free time is spent writing, usually (for better and/or worse) on a computer.

Eric Allen Yankee’s recent publications include The People’s Tribune, CC+D, Uut Poetry, The Fem, The Miscreant, and Ygdrasil.  He is the co-editor of Caravel Literary Arts Journal.  He is a member of the Revolutionary Poet’s Brigade of Chicago.  You can find him on Facebook at www.facebook.com/ericallenyankeepoet

3
when he woke in the woods,
nights dark beyond darkness.
the onset of dimming,
looked for any light,
there was none,
lost among the inward parts
of some granitic beast.
the earth of years
without room.

godless.
he wasn’t sure,
a calendar moving south.
there’d be no here

then everything
paling
in loose segments
looking for any movement,
smoke,
cotton

5
holding the land of God.
folded it, carried it,
spread the small tarp.
this was not a safe place,
essential things
to abandon

6
the wasted country
empty, precise,
a burden of okay.

they crossed the weeds
the broken asphalt apron,
the odor of windows intact

Michael Prihoda is a poet and artist living in the Midwest. He is founding editor of After the Pause and his work can be found in various journals in print and around the web. He loves llamas and the moments life makes him smile.

She seems trapped in that state of perpetual youth reserved for mannequins.
Her voice so fragile that I fear the words would break if I interrupted them.
Russian dolls
With innumerable diminishing replicas of themselves inside.
Like entry into a gallery of mirrors, fragmented
Into endless reflections.
What does she hear when she truly listens?
The world loses its memory, day by day, unknowingly,
Feeling all the wiser the more it forgets
But then a purple blade of light cuts through the clouds and generously sprays its hue over all and everything in its path
The spirit of the city seems to stroll most proudly through the streets.
The magic in all the wood, the freshly-ground coffee, the lightly spiced tea and the incredibly comforting hot chocolate.
She smiles at me from the past, unable to see the flames that close in on her.
Days of ashes.
To truly hate is an art one learns with time.

Source text: Carlos Ruiz Zafon, The Shadow of the Wind

Anushree Nande is a Mumbai-based writer, editor and proofreader with MA & BA Creative Writing degrees from Edge Hill University. She has short stories, essays and poems published on platforms like CommuterLit, When Women Waken, and Flash Fiction Online, among others. Anushree also writes about football, books, movies, TV for websites, blogs and literary magazines. Her micro-fiction collection, 55 Words, is now available on Amazon as a part of Underground Voices’ E-Series. See: tinyurl.com/z6jxfy2

To presume to write to someone about courage
and not complaining, don’t importune or make dying people cry.
I’ve always said Leave me alone with autumn.
Don’t stand around my bed, I won’t be in it.

Over 7 years after he died, I finally looked
through my father’s papers. Couple of unclaimed insurance policies,
savings bonds, our genealogy and on graph paper in an engineer’s
block lettering quotations from The Seat of the Soul.

Reincarnation and karma are the chicken soup of the soul,
the after life is the reward for our colossal imperfections.
Along with banking instructions, he’d underlined
this: Your soul is immortal. It exists

outside of time. It has no beginning and no end.
Every time you ask for guidance you receive it.
If we are not at home in the world, contributing purpose,
we lose our desire to stay here—and we die.

The physical world is an unaccountable given in which we unaccountably
find ourselves and which we strive to dominate to survive
or it is a learning environment created jointly by the souls that share it
and everything that occurs within it serves our learning.

Sin is activity directed toward self rather than toward service
to others. Sickness is sin. Almost any condition can be corrected.
You are part of God, therefore, think in a godly manner.
If you cannot accept this, forget it all. Do not even begin.

The first act of free will: How do I wish to learn?
If we participate in the cause, it is impossible not to participate in the effect.
We shall come to honor all of life sooner or later.
Until you become aware of the effects of your anger, you will continue to be an angry person.

Walking is the most commonly suggested exercise. Also, breathing.
“Thy will be done.” Concentrate on that!
These expressions of certainty, conjectures and guesses
were inscribed by him in block letters on graph paper.