There’s a family, as you might expect, with a mean, disapproving Dad.

Were the two of you very close before this all happened?

ADAM: I would have to say closer than most couples.

CAIN: We had each other. We’d play and talk and stuff. I don’t even remember fighting at all. We make sure that one never has a larger portion than the other.

When you promise to stay together in sickness and in health, you do wonder, what if something happens, an accident, something disabling?

Is it ever hard to feel like you’re a separate person?

CAIN: I was always jealous of Abel because he was very naturally talented. He was very creative and read a lot and was very intellectually engaged from an early age. He really stood out on the farm because he was the only one like that.

EVE: If anything, he tiptoed around, worried that he’d mess things up as everybody set the table or cleaned the kitchen.

CAIN: We stumble on these land mines that really explode into conflict between us. It divides people.

What does God have to offer them?

ABEL: All of a sudden, something inside me just started welling up. And it was kind of like a joyful feeling, but really joyful. Something was – I don’t know – a kind of warm feeling.

He just is not aware of other people’s feelings in any normal sort of way.

ADAM: You have to stop waiting around for Him to love you.

ADAM: Our Dad will always be harsh, will never treat him like he cares.He can’t change Him and shouldn’t try.

CAIN: So then he was gone.

Yeah, well, he was about as big as me, too. But I whooped him.

I mean, very simply, I missed my brother. I realized I had a brother once, and I no longer do.

EVE: The three of us couldn’t make it a family unit again. We would never be the same as before.

Because I have no concept of that.

I have tried to imagine that because when Abel died, I definitely tried to think about

And that’s probably the last time I thought about there maybe being a God.

Peter Sturtevant is interested in old stories, particularly the ones that continue to be retold and evolve. A poet, songwriter, and short story writer in his free time, he is currently pursuing a Master’s of Liberal Arts at the University of Pennsylvania with a focus on religious literature and creative writing.

Terrified and distracted
animals on a treadmill
we climbed, falling back
to solid ground: the final stage.

Screaming insanity (we rose out
of ignorance): we sensed,
dimly, that we
fully understood nature.

Wives
unthinking
callous
cruel
no love in such persons
convinced of their
heartlessness.

Surprise us with new-old-sweet-
selves. Dash the new structure
of affection.

Could we have been
so mistaken? They were
strangers, a great wall
had been built.

They did not love
(so blind). Their judgment
meant ruin to them.

Natasha Del Bianco lives in Vancouver, British Columbia. She is a queer mother, a legal writer, a part-time poet, and a full-time dreamer. Her poetry has appeared in Thirdspace and Esoteric.

1
Some of them disappeared.
Now, people don’t remember,

and sometimes I think they don’t
even understand where they are
and what the places are about.

How do we sleep when the planet is melting?

If you want to pray
for the souls of all

the people who are
in the ground in this place,

then come. And
sometimes it works.

3
This is not the last time
you’ll be able to eat.
It just looks like that,
when you stay outside
and observe people.

4
I can’t be in this place.
The tourists are looking
at things like they are
from another world.
“Ah,” they say, “interesting.”
It means that Goebbels won.

Howie Good, a journalism professor at the State University of New York at New Paltz, is the author of Dangerous Acts Starring Unstable Elements, winner of the 2015 Press Americana Prize for Poetry. He co-edits White Knuckle Press with Dale Wisely.

The potential      a strawberry has
absorbed the best of our knowledge

the old tree wet combusts in a rain wash:
is it the acidity, dissolving the iron table
the inner            bark decanted in the green
oven-house, isolated from natural light

but the strawberry. How does it conduct itself
when the day dissolves; reduced leaves
one plant plays the lowest synths, examines
impaired garden, concludes an immobile future:
the toxic harvest in its lone weight

Meghan Barrett is currently a graduate student at Drexel University, working towards a PhD in Biology. Meghan hails from Rochester, NY and is greatly inspired by the ecology of the upstate NY area. Her writing has previously appeared or is forthcoming in Firefly, Gandy Dancer, Mind Murals, and The Trumpeter.You can find her on Twitter as @Abiogenesister.

The plane wings away toward heaven
The population explodes

Mark Young’s most recent book is Mineral Terpsichore, from gradient books of Finland.  An e-book, The Holy Sonnets unDonne, has recently come out from Red Ceilings Press, & another e-book, For the Witches of Romania, is due out from Beard of Bees.

Lori Propheter has a master’s degree in English from Illinois State University, where she received a Sutherland fellowship. Her writing has appeared or is forthcoming in American Book Review, Prick of the Spindle, and Bone Bouquet.

2
when I see a pope so committed
to the poor,
to peace,
to love,

if you see a painting
on the wall,
there must be a god

4
you know I will be praying
for you
but I want you to pray
for you,
me, this crooked generation

5
it’s a world of god
money; I’m setting
up a pastoral plan of ghettos

so the elderly, they would begin
to dream again

Source: various articles from The Catholic Virginian newsletter (both online and in print).

Hannah Cohen lives in Virginia and is a MFA candidate at Queens University of Charlotte. She’s Poetry Editor of Firefly Magazine. Her work has appeared or is forthcoming from december, The Tishman Review, Public Pool, The Shallow Ends, and elsewhere. She tweets at @hcohenpoet.

Margie Kivel lives in Rockport, Maine. Her work has been published in The Lampeter Review (Wales), A Taste of Ink, and Anthology of High Tide Poets in Midcoast Maine. Her poem, “Jail House Rock”, was the winner of the 2015 Photo Finish Contest in Iron Horse Review.

As a messenger
of firstly your country (but also of mankind)
that we as people basically programmed by nature
and that our understanding
of almost everything
:: is far too limited.

No one seems much interested in anything to do with life.
((As could be apart from bacteria?))
Even Einstein’s theory that time is not linear
would suggest that if life ever lived there (or indeed ever does life there)
it could that it lives there today even if it died
millions of years ago / in linear time.

I strongly feel the image shows signs of life.

That the wheel is a metaphor of a fish almost like thunder after lightning.
That the drill hole may be responsible for damaging life

(in time and space) maybe
dislodging / quanta
;
or something
like that.

That the life itself is damaged
in a way we simply don’t understand.

The surface itself is arbitrary.
(Arbitrary isn’t simple as to what it means.)

Mars is certainly showing signs of life
(probably real high order life like zebras and big fishes type life maybe even people in my opinion) purely
as an educated citizen with no agenda.

Amy Engle is a professional writer, editor, and digital media/communications specialist based out of Los Alamos, New Mexico. She has an MFA in Poetry from the University of Utah, but is currently the full-time Social Media Manager for Los Alamos National Laboratory and spends her days finding poetry in science.

It’s because I couldn’t be there, isn’t it?

So I am leaving you and keeping all of your clothes.

And as I enter this dark country called marriage, I know
somewhere it is summer.

I didn’t know how to explain this one,
so I just said it was about sex.

Some of you in this room know what I’m talking about,
I hope.

I kept dreaming of car accidents,
preparing to leave the East Coast and everyone I loved.

Portland is a very civilized city.
Thank you.

You are one of the nation’s great secrets.
I know that when they say to you
we don’t want those kind of people around
you will say no, because it is right.

Can’t wait to see the poems that come out of this.

Poetry is not dying
and how wonderful you share it with your mother.

I should have gone first.

And what are you doing now?

Source: This poem is comprised of comments the author remembers from poets and writers during their readings in the state of Oregon between 1999 and 2010. Though it was not possible for the poet to remember the author of each comment, some of which were in the form of book signatures, personal exchanges she had with each writer and the writers’ off-the-cuff commentary during presentations, the authors referenced here include Marie Howe, Suzanne Fisher, Joan Didion, Maya Angelou, Dorianne Laux, Robert Pinsky, Tony Kushner and Yusef Komunyakaa.

Jennifer Rollings is a writer living and working in the Pacific Northwest.  Her work has previously been featured in Clementine Unbound, Every Writers Resource, WordWrights! and the journal Ardentia.  She has also been published in The First Line, and has work forthcoming there again in 2017. 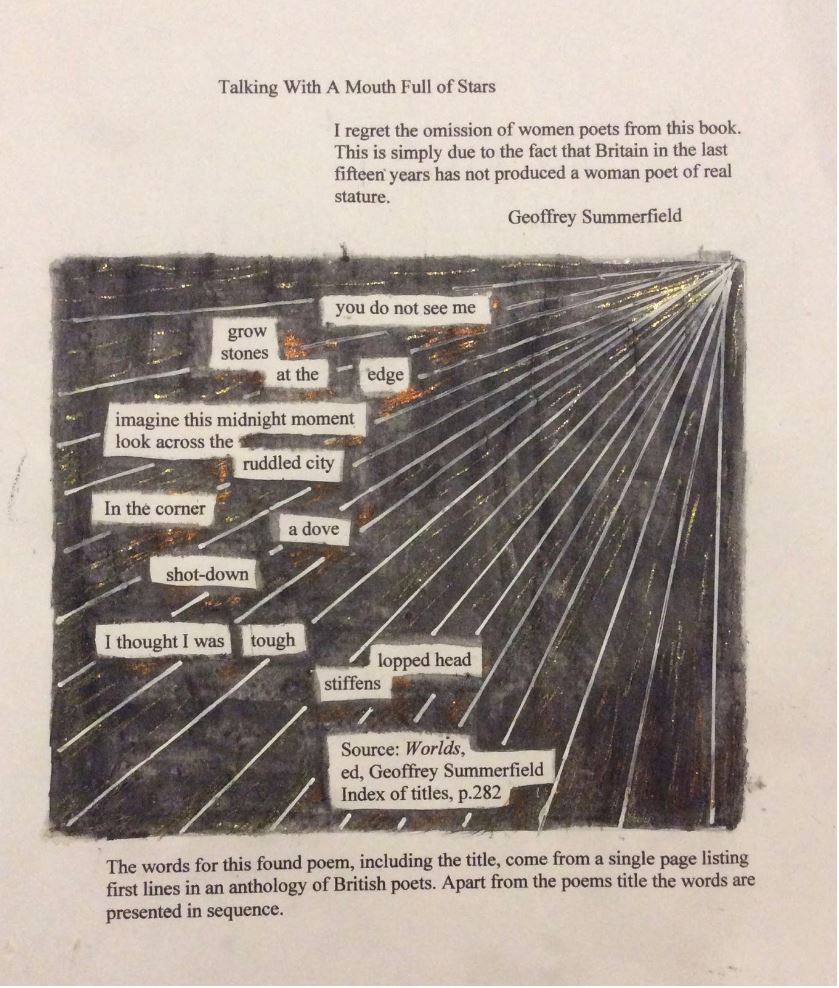 Karen Barton is studying The History of Art with Creative Writing BA at the Open University. She lives in Wiltshire, close to Stonehenge and her occupations have included magician’s assistant and dancer. She is founder and co-editor of Matryoshka Poetry and her work has been published in The Curly Mind, I Am Not A Silent Poet, Alyss and elsewhere.

Now courage is bowed and black
in the mass queer father house;
the table is wide-awake
sitting quietly with a candle.

Time is tiresome for those
with no soul and little head.
Children took the used night
and found god dead in his chair.

Mr Unremarkable let the day see the dark,
and took two strange friends into the back.

Source: The Sisters by James Joyce; Wordled, erased, repurposed, and reassembled as a fourteener.

Mark Russell’s pamphlets are ا (the book of seals) and Saturday Morning Pictures (Red Ceilings Press), and Pursued by Well-being (tall-lighthouse). ℵ (the book of moose) is due out with Kattywompus Press later this year. Other poems, vispo, and asemic work have appeared in Otoliths, Tears in the Fence, Lighthouse, and elsewhere. 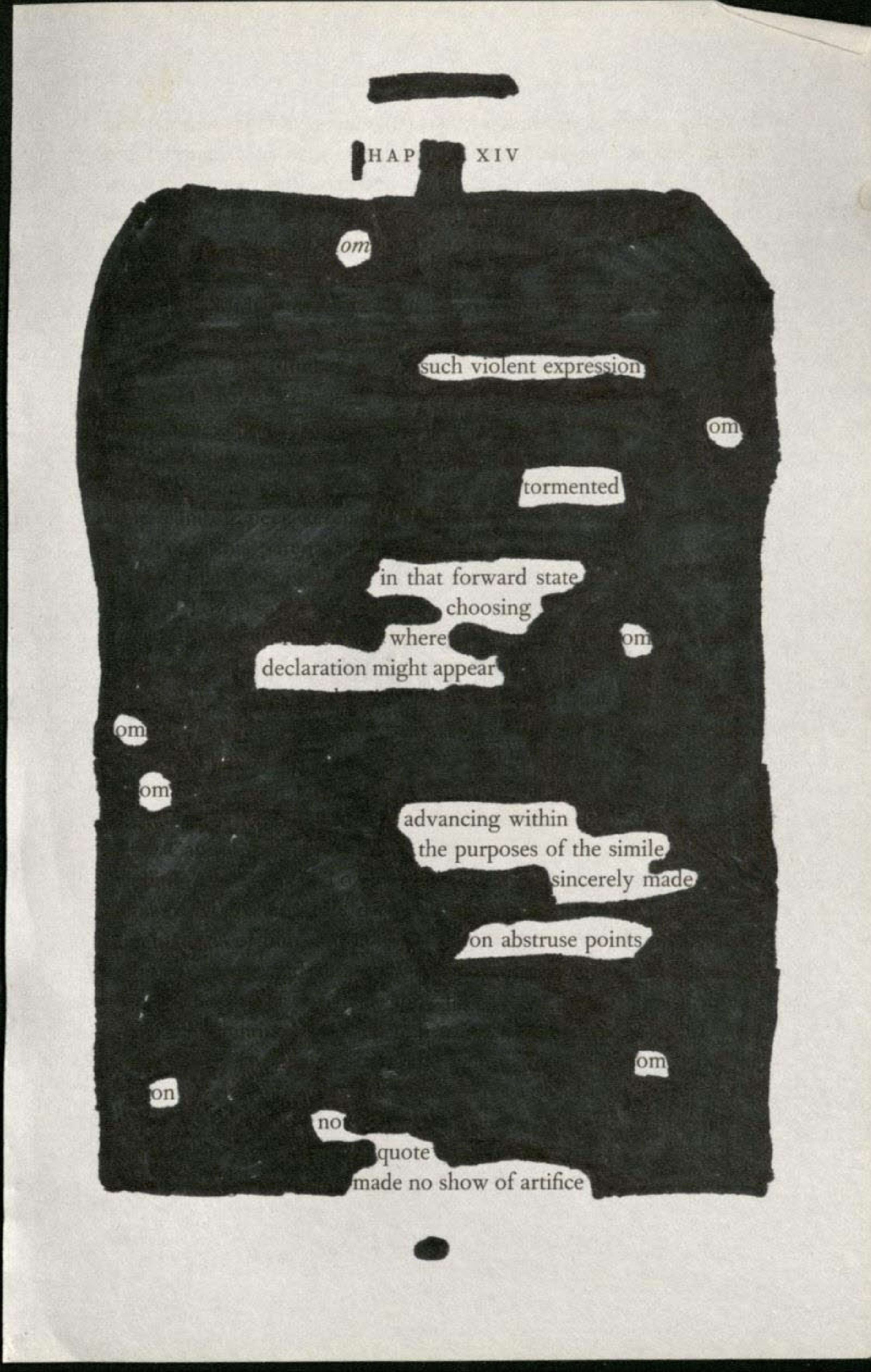 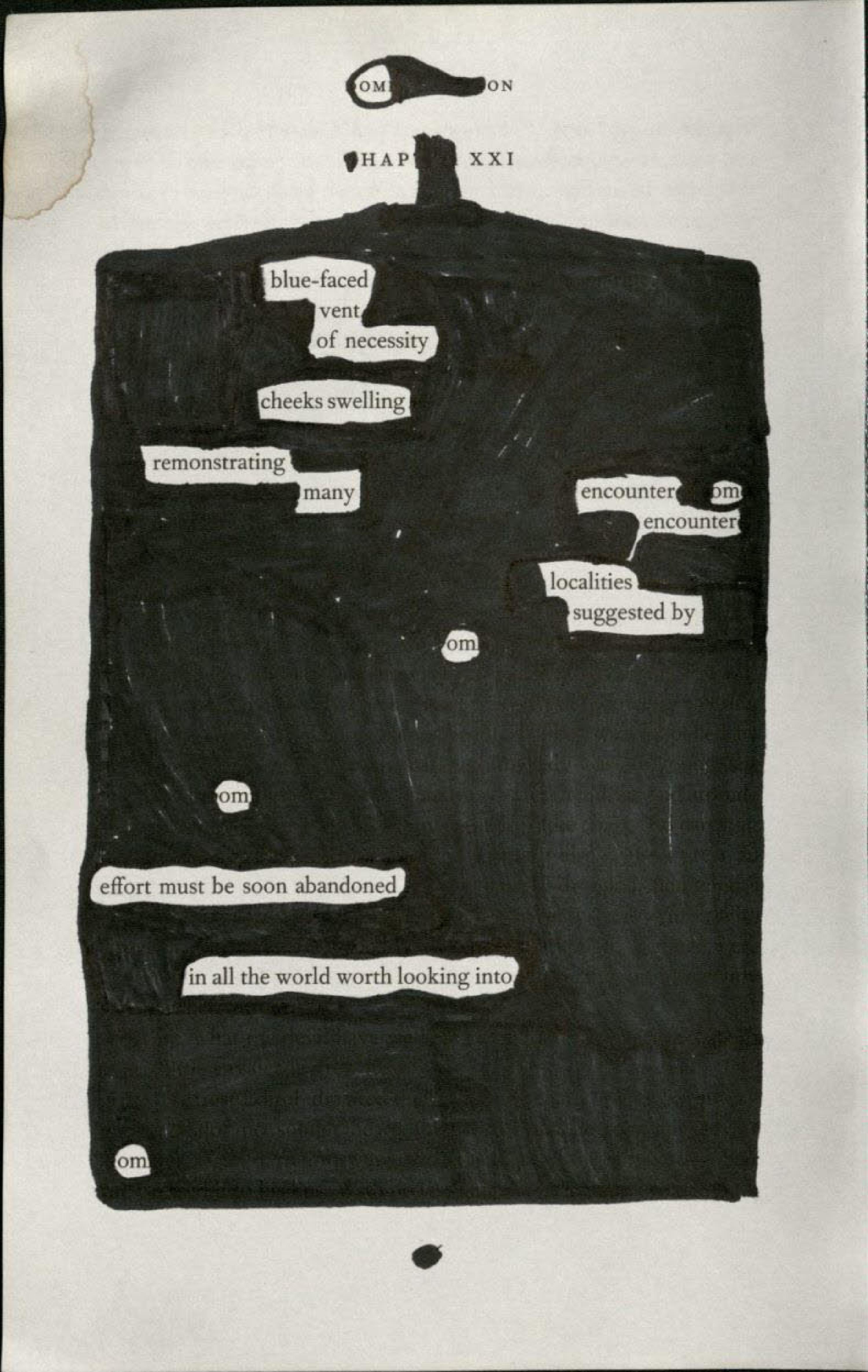 Source Text: Dombey and Son, Charles Dickens. Hap 14 and Hap 21 are from a larger project titled, Om On.

Brandon North is a poetry candidate in the NEOMFA program, through which he works for the Cleveland State Poetry Center. His work has recently appeared in decomP. He can be found at centeringspirals.blogspot.com.